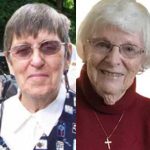 Reverend Barbara MorganRev. Morgan, 83, former Rector of St John In The Wilderness, passed away peacefully on May 30 at her home. She was ordained an Episcopal Priest in 1992 and named Rector of St John’s in 1998, serving until her retirement in 2007. During her tenure, Barbara was well known for her ministry to both the congregation and the Roe Jan community. She was lovingly cared for by Betty Shufelt and family of Ancramdale over the last twelve years.

Jean Peck, born in Great Barrington, passed away in Webster, NY the morning of June 16. She was a lifelong, very active member of the Church of St John In The Wilderness, serving in every capacity, and was a past president of the Roeliff Jansen Historical Society. She raised four boys, worked in the medical field until retirement, and her life revolved around her family, her friends, and her faith. She volunteered with Community Hospice and later at the Webster Comfort Care Home, where she lived out her final days in the care of those with whom she once served.